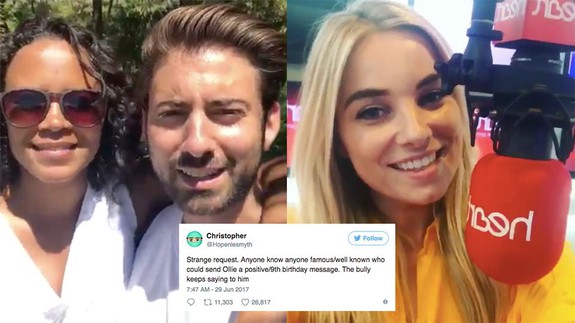 The internet may be full of angry people and trolls, but sometimes it’s just plain nice.

SEE ALSO: Rapper performs emotional song written by an 11-year-old to his bully

On Thursday morning, Christopher Hope-Smith asked Twitter for help. His son Ollie was turning 9 soon, Hope-Smith wrote, but there was a bully who kept telling him his birthday wouldn’t be “as good as his own”.

Hope-Smith had other ideas, though. He wanted to make sure Ollie’s birthday was his best so far.

Strange request. Anyone know anyone famous/well known who could send Ollie a positive/9th birthday message. The bully keeps saying to him