I am firmly in the camp that leftovers from Thanksgiving vastly outpace the quality of the food on the actual holiday. Something magical and mysterious happens in the fridge: The components in the stuffing marry more fully, the mashed potatoes thicken, the gravy congeals and intensifies in flavor, and the turkey…well the turkey is still turkey but you get my point.

This year I cooked a full Thanksgiving meal for just two people, which meant I had nearly endless leftovers to use however I pleased: breakfast hash, bowls of leftovers slathered in gravy, glorious sandwiches.

Last year I made leftover egg rolls, deep fried, heavenly, stuffed to the brim with stuffing, turkey, and mashed potatoes, dipped in a cranberry aioli. Look at these big honkers; they were fantastic.

So, when I saw Kroger — you know, the supermarket chain — post a recipe for air-fried leftover egg rolls, I was super intrigued. So were lots of folks it seems because the TikTok has racked up 2.3 million views. If I could get a similar result without the hassle of deep frying, it would be amazing. Kroger’s final result didn’t look quite like a deep fried egg roll — more on that later — but it did look tasty. The recipe is wildly simple. Here’s what Kroger suggested, although later I’ll show where and how I modified things.

The ingredients in this recipe are deceptively simple. I say deceptively because you would’ve had to have made a whole ass turkey and a batch stuffing. But if you’re out of leftovers, or they’ve gone bad, or whatever, guess what? I wrote how you can air fry turkey and stuffing, because Mashable’s AirFryDay is nothing if not thorough, baby.

Now, getting egg roll wrappers might also prove kind of difficult. Your best bet is going to be in the freezer section in a well-stocked grocery store. (One assumes Kroger carries them since, you know, they posted this recipe.) My two local groceries in Brooklyn did not have them, however. A note: Do not buy spring roll wrappers, which are a rice paper wrappers you dip in water. These are different than egg roll wrappers. Eventually I was able to get egg roll wrappers from a local Asian market. They came frozen but defrosted in like 15 seconds in the microwave. If all else fails you could always try to make your own.

When making this dish, like any other dish, the first thing you should do is your mise en place, which is a fancy French way of saying getting prepped. Chop the turkey, mix it with stuffing, defrost your wrappers. The wrappers should feel malleable while not heated through at all.

Two things about me: I hate following recipes perfectly and I love mashed potatoes. So I decided my test of the air fryer recipe would include one egg roll exactly how Kroger did it and one where I added a plop of mashed potato.

The most difficult part of the process in this recipe is the folding and rolling of the egg roll itself. It’s not hard, really, it’s just delicate. The real risk is tearing a seam in your wrapper, which I definitely did once but will not appear on Mashable dot com’s video via the magic of editing.

There are a few tricks to keep in mind when rolling. First, when you plop down your filling, don’t go too crazy. Less filling makes for a more orderly egg roll. But also… don’t skimp because why skimp? I did one egg roll with the Kroger turkey/stuffing filling and another where I spread a stripe of mashed potatoes atop it all. 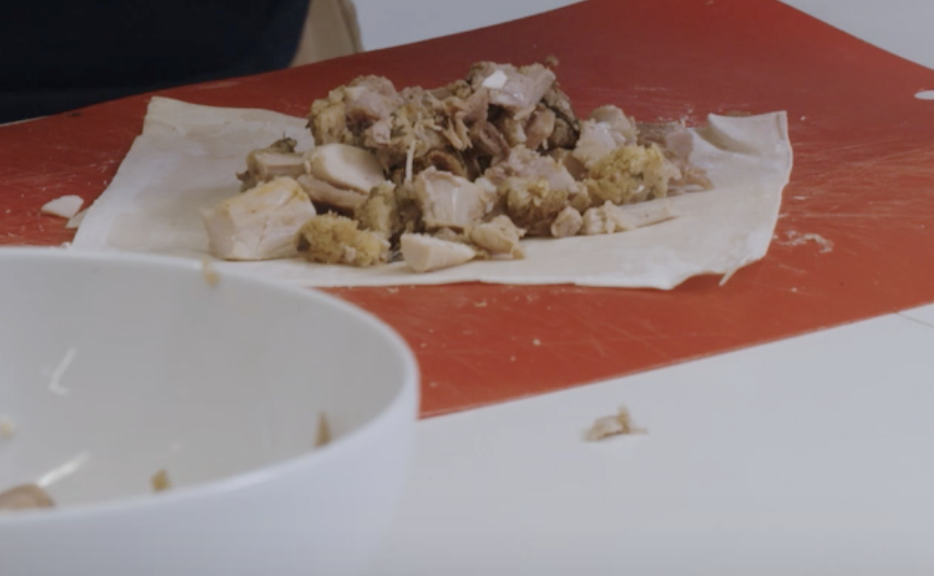 The filling before being rolled.
Credit: Mashable

Next, when you’re ready to fold and roll, sort of cup the filling with your hands to keep it in a neat shape and in place. As you fold the bottom of the diamond over the filling and begin to roll, the cupping of your hands will form a nice cylindrical-shaped filling. The cupping of the egg roll in action.
Credit: Mashable

You can seal the edges with water when you fold the sides — you don’t need to — but just be sure to paint the envelope-shaped end of the wrapper with water then seal. Then do not fuss with it. If it’s imperfect, lumpy, tenuously sealed, whatever, just leave it be. You’ll just mess things up further by trying to make it perfect and the heat will be what really seals it all together.

Full disclosure: I tested this recipe in the Mashable office for filming purposes and used the office’s air fryer, which was an older model than my at-home unit. For some reason, it would let me air fry at 360 degrees or 390 degrees, but not 370 degrees. I chose 360 degrees, which meant my egg rolls took closer to 12 to 14 minutes to fully cook rather than 11. Here’s what they looked like when I flipped after about 8 minutes. 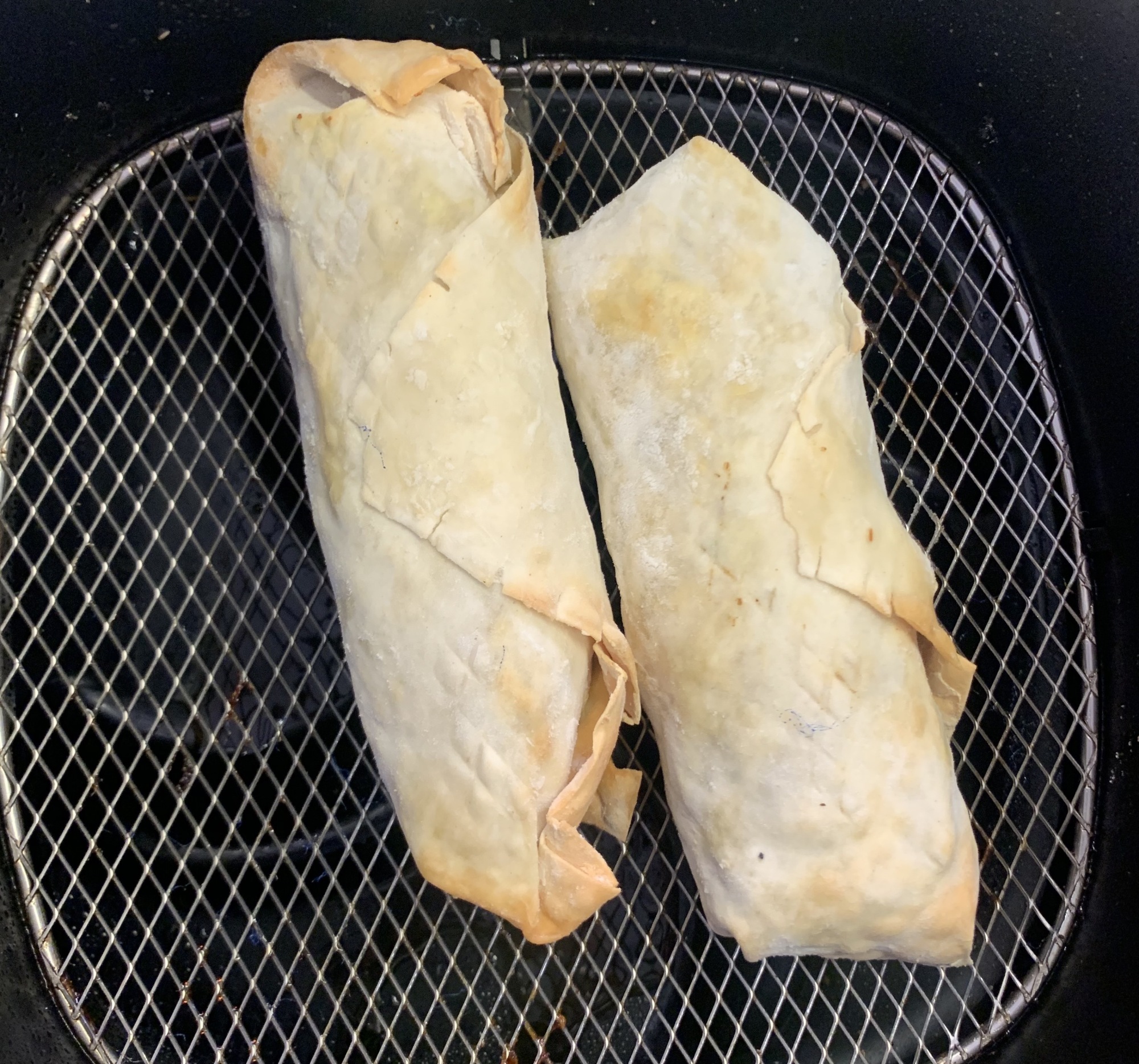 Not quite done yet.
Credit: Mashable

And here’s what the egg rolls looked like full cooked. 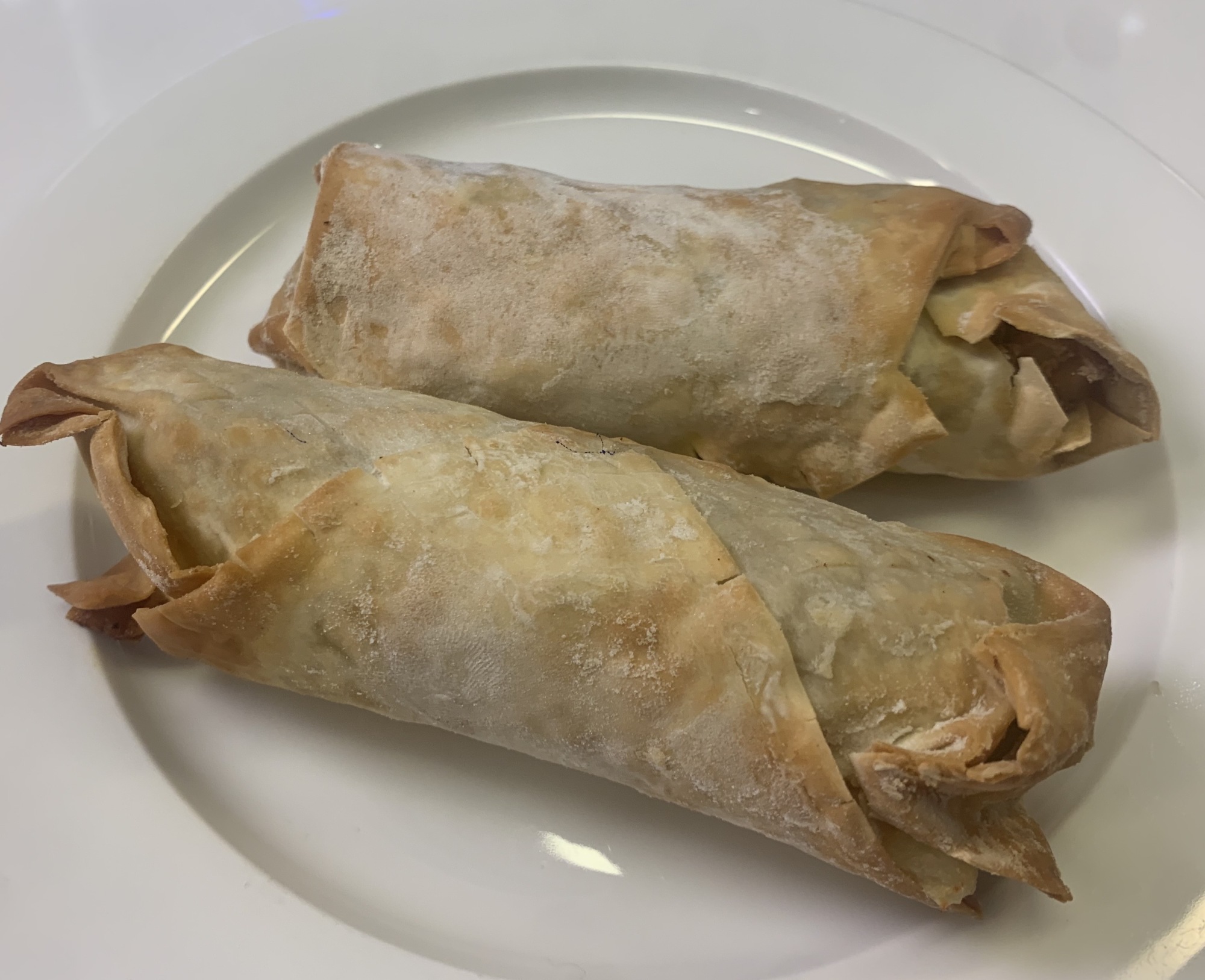 They don’t look like traditional egg rolls, but they’re not bad.
Credit: Mashable 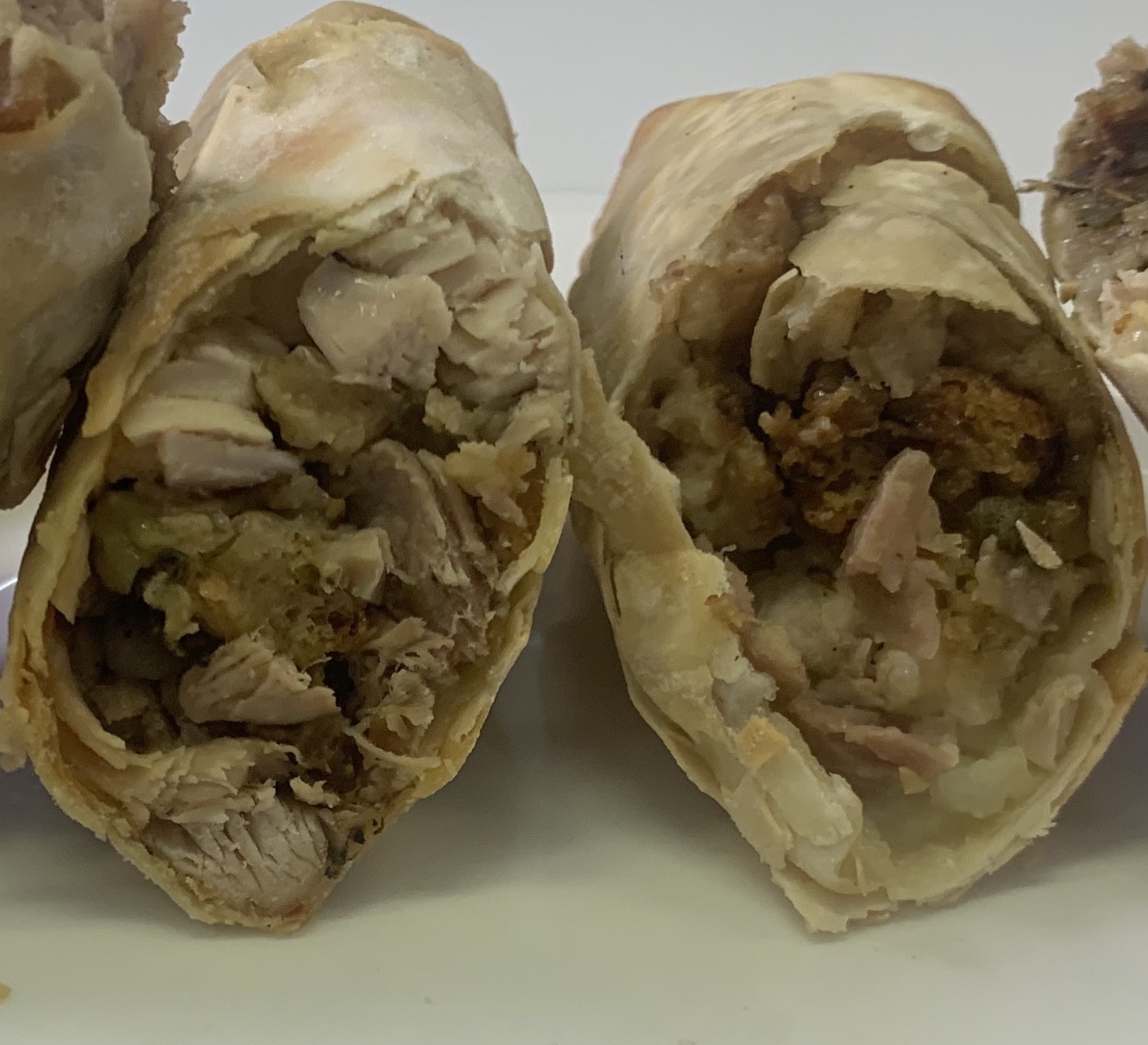 The one on the right has mashed potatoes in it, the left does not.
Credit: Mashable

The verdict? They’re tasty. The skin of the egg roll ends up taking a more flaky, crisp texture, not exactly the bubbly, airy result you get from frying in oil. If frying in oil creates a 10 out of 10 texture, then air frying, I’d say, is about a seven. It’s crunchy, it’s good, but it’s not as good as frying in oil. Yes, it is more unhealthy, but frying it oil is freaking delicious.

I’d also argue you should include mashed potatoes if you’re able. Reheated stuffing plus reheated turkey can be a bit dry — while still good — even if you’re dipping in gravy. Adding mashed potatoes, which of course are laden with butter and milk — adds some much need moisture and a welcome pop of salty fattiness. Still, did I eat all of both egg rolls for lunch? You’re damn right I did.

All that being said, my wife was a bit sad she missed out on Thanksgiving leftover egg rolls. The next day I made a couple at home for the two of us to enjoy. I rolled up some turkey, stuffing, mashed potatoes, and charred Brussels sprout leaves then fried the egg rolls in about an inch of canola oil. Simply put, they were much better than my air fried offering. Notice how the skin is bubbly and airy, and there are distinct layers of puffy, crisp wrapper? You just don’t get that in the air fryer. 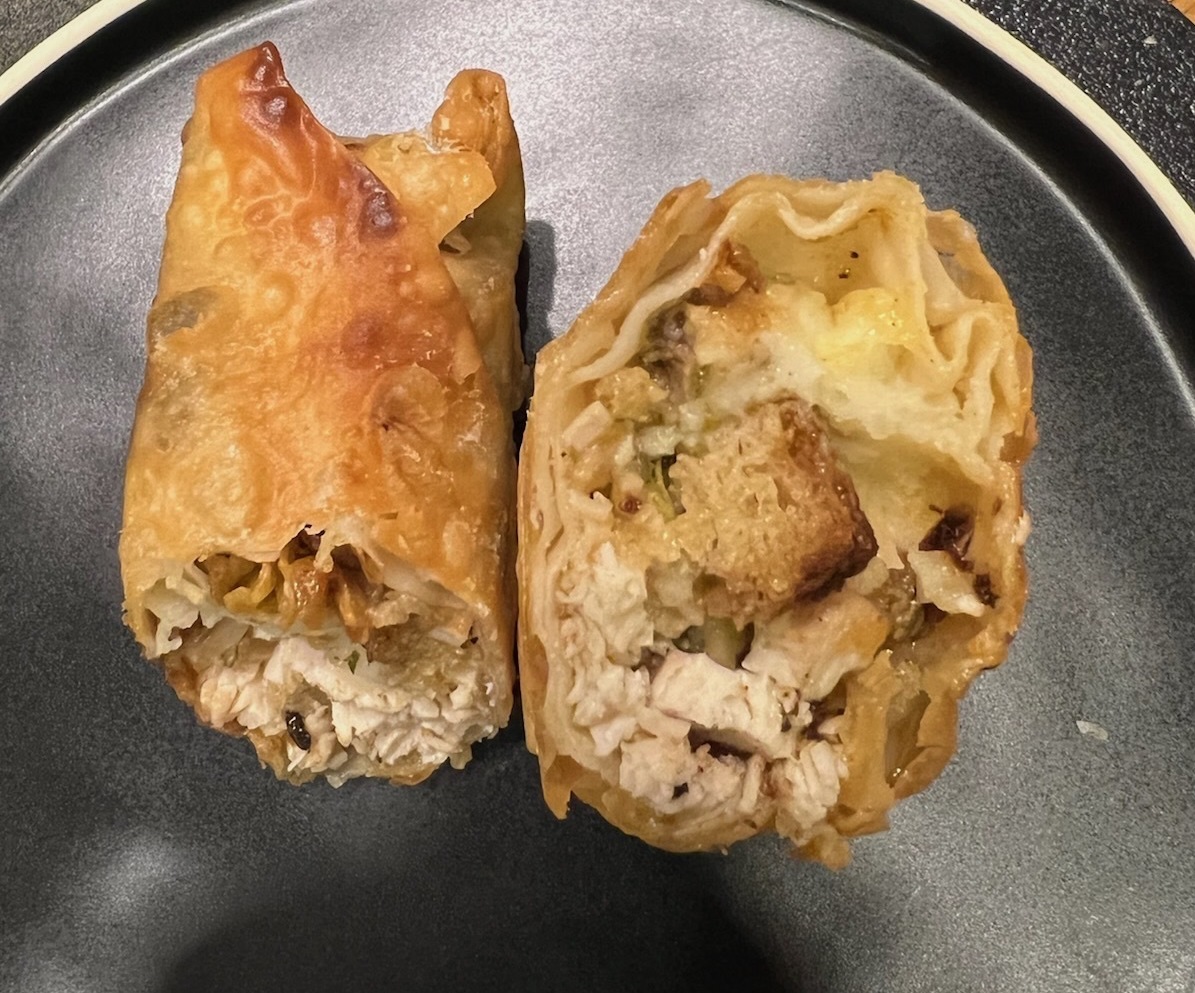 Still, air frying Thanksgiving leftover egg rolls works and is super tasty. And while it’s not as good as its oil-fried counterpart, air frying also didn’t leave me with a mess on the counter and a bunch of oil to toss out.