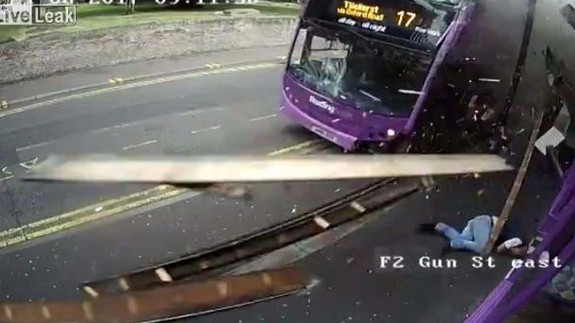 One man is lucky to be alive after he’s brutally struck by a double-decker bus in Reading, England.

In this intense video, Simon Smith walks away with only minor injuries after the bus knocks him off his feet from behind and throws him around 20 ft., according to The Telegraph. The bus appears to make an extra wide turn, then hits street furniture, jumps the pavement, and knocks into Smith’s back before returning to the road. He miraculously dusts himself off, seeming barely scathed, and walks into the entrance of nearby pub, The Purple Turtle Bar, before being tended to by onlookers.

The bus driver was taken off the road while an investigation was carried out, and the road was closed for about two hours. The Reading Spokesman released a statement apologizing for this unfortunate incident.  Read more…