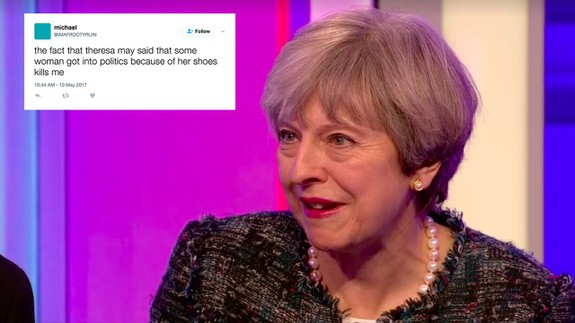 It’s the final countdown to the UK’s snap General Election. So, naturally, politicians are out in force, attempting to convince the general public to vote for them.

Prime Minister Theresa May appeared on BBC’s The One Show on Tuesday evening and claimed that her shoes inspired someone to get into politics. And, suffice it to say, viewers were not convinced.

SEE ALSO: How a pair of leather trousers reduced the government into a bunch of ‘Mean Girls’

May said that around four or five years ago, she was talking to a young woman in the lift in the House of Commons

“I said ‘ooh nice pair of shoes’ and she said ‘ooh I like your shoes,’ and then she looked at me and said ‘your shoes got me involved in politics,'”said May.  Read more…

More about Watercooler, Politics, Uk, Shoes, and Theresa May