The creepy doll on ‘The Bachelorette’ is a viable suitor given their low, low standards 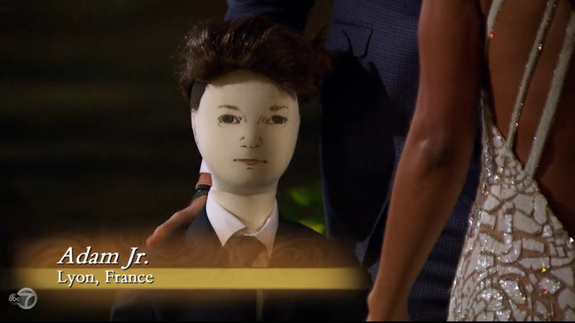 Rachel Lindsay suffered many indignities in the season premiere of The Bachelorette and accepted it all with poise, even when a man attacked her by playing an acoustic guitar at her. Another dude who’s known her since they were children was suddenly interested once it meant he could be on television.

Still, she was only thrown off her game when she met Adam Jr., a doll who is, apparently, French.

SEE ALSO: Why do ‘The Bachelorette’ producers hate Rachel Lindsay?

“That’s scary looking,” Lindsay says, backing the hell away. “I don’t know which one to look at.”

Adam Jr.’s chaperone, Adam, is a real estate agent based in Dallas, so it’s sort of unclear how the pair met. Also, does Adam Jr. have a job? Even a fake job, like Whaboom? A lot of questions here.  Read more…