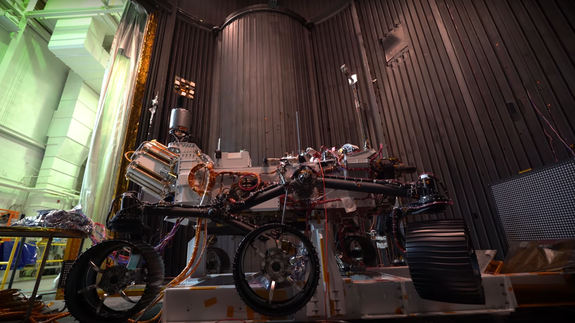 NASA’s latest car-sized, six-wheeled Mars rover, currently dubbed the 2020 Rover, is in the final stages of testing before launching to the red desert planet.

On Thursday, NASA released footage showing researchers transferring the rover into a vacuum testing chamber at the agency’s Jet Propulsion Laboratory in Southern California. There, NASA subjected the rover to a simulation of Mars’ frigid atmospheric conditions to ensure the rover’s antennas, ground-penetrating radar, cameras, and equipment work under such extreme, extraterrestrial environs.

Our #Mars2020 rover was moved into a vaccuum chamber at @NASAJPL for testing in Mars-like environmental conditions. It’s set to launch in July 2020 and land in the Red Planet’s Jezero Crater in Feb. 2021. Is your name on board? 🎟️
Watch: https://t.co/lxUk5kZRFz pic.twitter.com/A5EMkTHsHt