Citizen app launches paid service to monitor you through your phone Would you pay a subscription for the neighborhood watch app Citizen?

The premium Protect service, which is now available for iOS, began testing earlier this year with nearly 100,000 beta users. One new feature that particularly stands out allows the company to monitor your smartphone audio using AI-powered technology.

The Citizen Protect service is designed to provide customers with a live, human safety expert on-demand. The company is promoting this as a way to have “peace of mind when you’re alone” or a way to call for help in situations where a customer would not or could not call 911.

Citizen’s safety experts could then send emergency responders directly to a Citizen Protect customer’s location or direct them to a spot where they would be safe, notify family members of an incident, and alert other users in the area.

“Citizen has been a one-way system to date. We provide real-time situational awareness and our users can decide what to do with it,” said Citizen CEO Andrew Frame in a statement emailed to Mashable. “Starting today, Citizen is now a two-way system where users can request help from Citizen.” 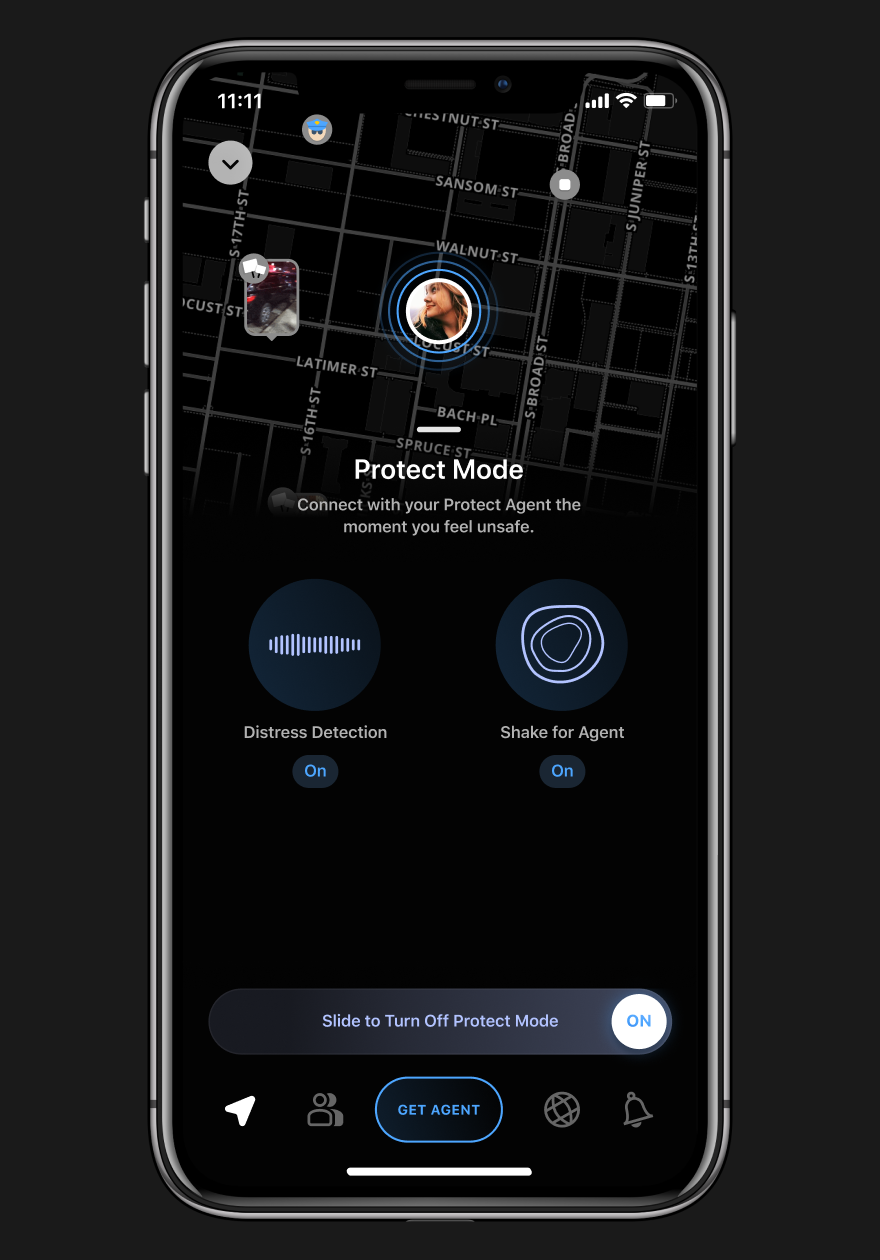 Citizen Protect comes with a “Get Agent” button which a user simply taps to connect to a safety expert. Customers could interact with the agent via video call, voice chat, or text message, which Citizen says can be helpful when a customer needs to be discreet.

Premium features also include “Protect Mode.” When this mode is turned on, users can choose to enable “Shake for Agent” and “Distress Detection.” Shake for Agent works exactly how it sounds: Users can shake their phone twice to connect directly to a Citizen agent.

Distress Detection is a mode which allows Citizen’s AI-technology to monitor audio through your phone. If it detects a “distress signal,” such as a scream, the app will ask if you want to be connected to an agent. A user will then have 10 seconds to respond, at which point they’ll be automatically connected to a live agent in case of an emergency situation.

Mashable reached out to Citizen to discuss privacy concerns related to this feature. For example, while a Citizen Protect mode customer may consent to Distress Detection, a nearby non-customer third-party could surely have concerns about the service spying or snooping on them.

A Citizen spokesperson assured us that “Protect Mode is only powered by AI, which means no human is ever listening to a user’s audio.”

The spokesperson also claimed that Citizen did not record any audio via Distress Detection. Any data from Protect that is recorded, such as location data, is “deleted after 30 days.”

Citizen has given its users plenty of reason to be concerned about these new Protect features. And it’s certainly not the first time the company has been criticized over its services. As anyone can report incidents on the app, false information found on Citizen has previously been used to fear-monger within neighborhood messaging apps and local Facebook Groups.

A recent report from Motherboard uncovered that Citizen was testing out on-demand private security services. These privatized “emergency responders” were even seen in the field while patrolling Los Angeles.

Citizen was also recently roundly criticized following an incident where its CEO Andrew Frame offered a $30,000 reward for anyone who could find alleged arsonists said to be behind wildfires in California. The CEO even included a photograph of the suspect. However, Frame soon had to apologize as it turned out the individual he’d put a bounty on was the wrong guy.

It’s unclear whether a market exists for such a paid service, especially given the company’s troubled history.

UPDATE: Aug. 3, 2021, 1:38 p.m. EDT This story has been updated with information from a Citizen spokesperson regarding the service’s Distress Detection feature.