Maura Murray seemingly vanished from the face of the earth after a car accident on February 9, 2004. Her disappearance, a mere days after Facebook launched, was one of the first cases to put social media sleuthing to the test as users created Facebook and MySpace pages to solve the mystery of her disappearance. She was 21 years old.

Now, nearly 18 years since she was last seen, Maura Murray’s suspicious disappearance is putting social media to the test once again.

On Tuesday, Twitter announced a new policy update prohibiting the sharing of “private” media of private individuals without their consent on its platform. The fairly vague policy immediately caused debate among Twitter users, especially concerning how this could possibly affect journalism on a service that is primarily used for breaking news.

“As soon as the new policy was in place, I got a dozen reports filed against me by the people I’ve covered in articles about the Maura Murray case,” said Renner, who wrote a book in 2016 titled True Crime Addict: How I Lost Myself in the Mysterious Disappearance of Maura Murray about her missing person case..

As of late Wednesday afternoon, Renner once again had access to his account but only after deleting four of the tweets that had been reported.

“I appealed on each. They denied the appeal on each,” said Renner. “Then I deleted in order to get back into the account. I’ve had to delete every single one. They’re mostly just links to stories I’ve written.”

And that’s a very interesting characteristic of these reported tweets. Twitter’s new policy mentions media, such as photos and videos. Do links to third-party websites count, too? Renner tells me that Twitter did post an embed card for the link, which automatically pulls a picture from the linked website into the tweet. Is that why these tweets fell under this policy?

“I [was] locked out of my account for simple reporting and linking to my articles,” Renner told Mashable. 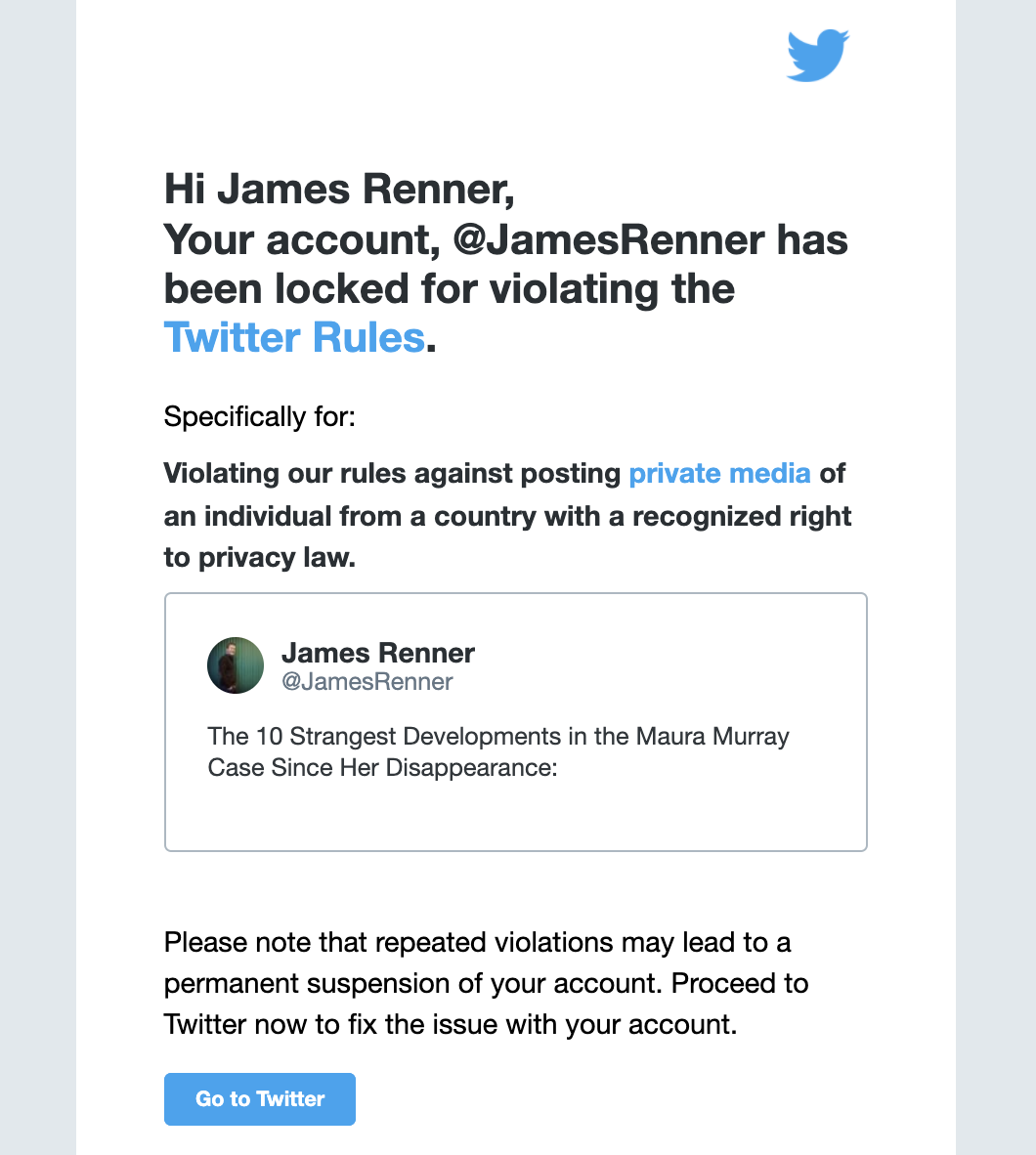 An email notification from Twitter showcasing one of the tweets which locked James Renner out of his account.
Credit: Mashable Screenshot / James Renner

Renner, the founder of cold case nonprofit The Porchlight Project and host of a true crime series on ID Discovery, is not sure who reported the tweets. Twitter’s new policy rules state that tweets will only be flagged if they are reported to the company by the person depicted in the media or someone who represents them.

The true crime author tells me that he knows at least one of the reports was not triggered by the person depicted in the tweet because the person would need to be Maura Murray, the young woman still missing after nearly two decades.

It is possible that Maura Murray’s family is behind the takedown of that particular tweet. Again, Twitter does allow a “representative” of the depicted person to file a report. Renner’s self-described “obsessive” reporting on the case has been criticized before and Murray’s father, Fred Murray, has been one of those critics.

One of the issues Renner’s critics have with the true crime author is his beliefs on what reporting should entail.

“I’ve come to believe that there’s only one way to establish credibility with readers, and that is to show them how you’re making the sausage,” he writes in his 2016 book. “I think reporters should open up their research to all those interested and bring them along for the ride. That means scanning and posting the supporting documents you use to gather your facts. But I think it should go further. What I’d like to see is an open-sourced form of reporting, where journalists put notes and documents and pictures and sources in something like a readable Google doc as they are reporting.”

In its piece, the New Yorker classified Renner’s methodology as “madness.”

However, another tweet from Renner focusing on Bill Rausch, Murray’s boyfriend at the time of her disappearance, was also reported, forcing Renner to delete it. Rausch, a U.S. Army Major, has been a key figure for true crime aficionados following Murray’s disappearance.

In recent years, Rausch has been charged on felony sexual abuse of a subordinate. The ongoing case has received local news coverage. The victim actually went to the police to report the alleged assault after discovering Rausch’s connection to Maura Murray through online reporting, such as Renner’s. 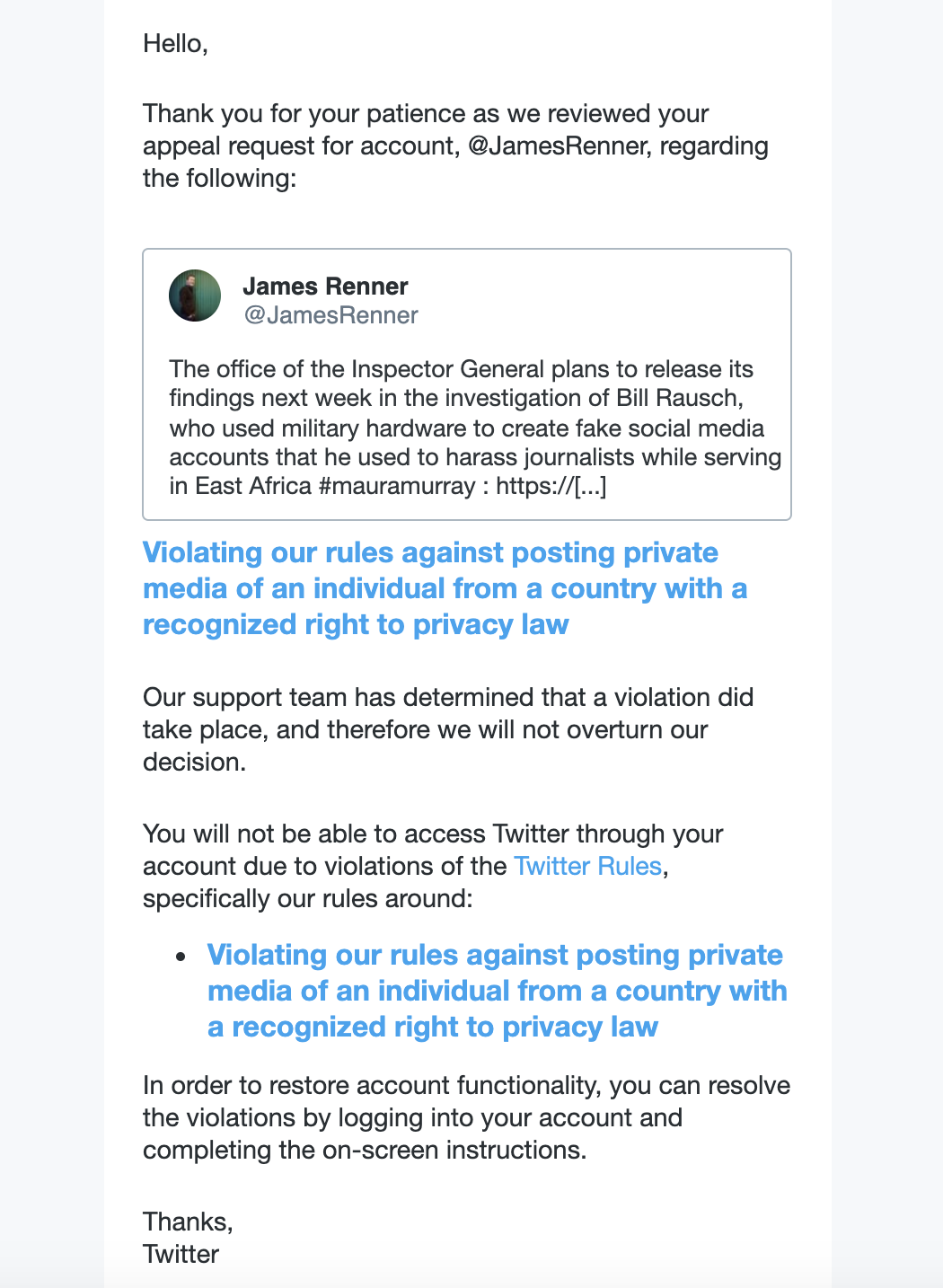 “Given that I’m the only one reporting on the ongoing sex abuse trial of this missing woman’s boyfriend, I’m concerned that he has effectively killed the story,” Renner said, assuming Rausch is the one who reported his tweet. Mashable is unable to confirm this as Twitter does not share who has made the reports.

One of the exceptions to this new rule, according to Twitter, is that the policy is “not applicable to media featuring public figures or individuals when media and accompanying Tweet text are shared in the public interest or add value to public discourse.”

But, an argument can be made that all legitimate journalistic endeavors are in the public interest. Where does Twitter draw the line?

Renner isn’t the only one struggling with Twitter’s new “private” media policy. Anti-extremism researchers are reportedly having their accounts suspended due to the platform’s recent change.

Twitter is a popular platform for these researchers and journalists specializing on covering right-wing extremism to identify white supremacists, neo-nazis, and far-right personalities who spread offline hate. However, those very extremist individuals are now organizing online in order to weaponize Twitter’s reporting tool.

For example, in one such reporting instance, a research’s account was apparently locked for sharing a photo of Proud Boys leader Enrique Tarrio, who is currently serving a prison sentence for destroying a Black Lives Matter banner belonging to a historic Black church in Washington D.C. Tarrio is both a public figure and a person of public interest.

When the new “private media” policy was announced, it was clear that its effectiveness would rely on how Twitter enforced it.

Could the policy help private individuals who are being harassed on the platform? Sure. But it’s clear that, in its current implementation, it is being used to stifle reporting on newsworthy issues that are already of the public interest.