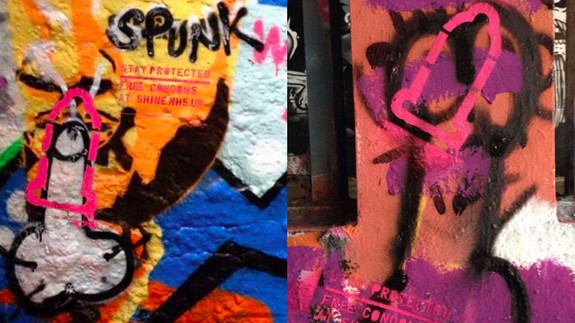 Graffiti penises are “outdoor decor” you probably think you’d rather not encounter. But a safer sex advocate from the UK might just change your mind on that.

An anonymous 28-year-old Londoner is raising awareness of sexually transmitted infections and the importance of protection by spray painting condoms on graffiti penises. Yes, you heard that right. And it’s damn genius.

Sure, it’s technically illegal. But it’s also a pretty genius way of starting a conversation about safer sex.

“One night I did some research on STI rates, and then the idea just came to me to make stencils of a condom and a link where people can get free condoms — then I just went out and did it,” the man, who is an art director by day, told BuzzFeed.  Read more…