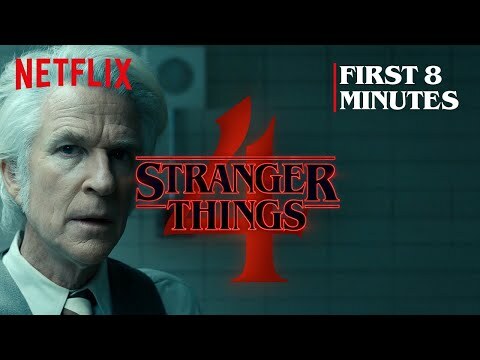 We’ve got our first glimpse of Stranger Things 4, and, boy, is it a lot.

Netflix released the first eight minutes to watch on Youtube, but these eight minutes left us with a lot more questions than answers. The sequence is an extended flashback to 1979, before the main events of the show. Dr. Brenner (Matthew Modine) is still running experiments at Hawkins National Laboratory. Surprisingly, he doesn’t seem as evil as he was in Season 1. Here, he runs tests with a young telepathic boy, named Six. He jokes with him and even encourages him not to push himself too hard once his nose starts bleeding. Who are you, and what have you done with Dr. Brenner?

5 big questions we had watching the ‘Stranger Things 4’ trailer

Things quickly take a turn for the horrifying when Six says he can see blood, and that another doctor and child are dead. Cue the screams and explosions from outside, one of which kills Six. Dr. Brenner stumbles through the lab, seeing nothing but carnage and corpses. Then he arrives at the Rainbow Room, where he finds the cause of all this destruction… Eleven (Millie Bobby Brown).

Her head? Shaved. Her eyes and nose? Bloody. Her whole vibe? Enraged. Why in the world did Eleven go on a murder spree? And why doesn’t she kill Dr. Brenner along with everyone else? To find out the answers, we’ll just have to wait one more week for Stranger Things 4.

The first seven episodes of Stranger Things 4 hit Netflix May 27, and the last 2 hit Netflix July 1.