NASA spots a big dust storm on the Martian surface 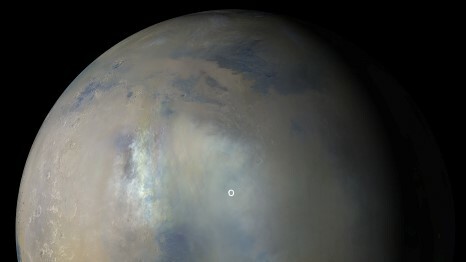 NASA’s distant satellite, the Mars Reconnaissance Orbiter, recently captured a sizable regional dust storm on the Red Planet, encompassing the area where the space agency’s Perseverance rover is investigating the Martian surface. This area, a former river delta called Jezero Crater, is shown by the white circle in the image below.

Dusty conditions put a hitch in NASA’s plans to once again fly its expectation-exceeding Ingenuity helicopter (part of the Perseverance mission). The air became too dense, and insufficient sunlight would have reached the little experimental chopper’s solar panels for a safe flight. (Flight 19 is now scheduled for no earlier than Jan. 23.)

“The presence of this storm came quite early – even before the dusty season traditionally starts!” NASA wrote. “In fact, we have never seen a storm of this strength so early in the Mars year before.” 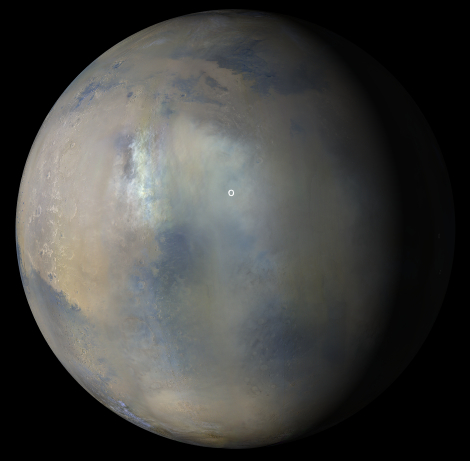 Elsewhere on Mars, thousands of miles away, another dust storm forced NASA’s solar-powered InSight lander to power down into “safe mode” on Jan. 7. “In safe mode, a spacecraft suspends all but its essential functions,” explained NASA. When dust storms completely drain a Martian robot’s batteries, engineers might not be able to restart the machine. A mighty dust storm ended the legendary Opportunity rover’s mission in 2018.

Fortunately, InSight, which is recording earthquakes on Mars among other geologic investigations, exited safe mode as the skies began to clear.

Martian dust storms can be huge, but they’re also normal. “Every year there are some moderately big dust storms that pop up on Mars and they cover continent-sized areas and last for weeks at a time,” explained Michael Smith, a planetary scientist at NASA’s Goddard Space Flight Center.

Sometimes, these regional dust storms graduate to planet-encompassing monsters. Those great storms occur around every five-and-a-half years. It’s an intense extraterrestrial event, and NASA’s Mars satellite will watch the stormy scene from space.