Early on in Bodies Bodies Bodies, the discovery of a dead body ruins what was supposed to be a hurricane house party. That corpse belongs to David (Pete Davidson), and from the looks of it, someone slit his throat with a sword. Seems like there’s a murderer on the loose! Everybody, get your accusations in order!

Could it be Greg (Lee Pace), the oldest newcomer to the group who’s been dating David’s friend Alice (Rachel Sennott) for two weeks? Could it be Sophie (Amandla Stenberg), fresh out of rehab with a grudge against her hard-partying friends? Or is it the mysterious Max, who got into a fight with David the previous night before fleeing the remote mansion?

Actually, it’s none of the above! Mashable spoke with Bodies Bodies Bodies director Halina Reijn to learn more about the film’s final — and shocking — twist.

Turns out there never was a murderer in the first place. David’s death was just an accident. After seeing Greg oh-so-coolly cut open a bottle of champagne with a sword, David just had to try it out himself. Unfortunately, the sword failed to slice off the champagne bottle’s neck, slicing deeply into David’s neck instead. All the deaths that came after David’s — Greg’s, Emma’s (Chase Sui Wonders), Alice’s, and Jordan’s (Myha’la Herrold) — were paranoid fallout from one ridiculously stupid mishap.

Initially, part of me was frustrated that there was no big Scream-level killer reveal. But the more I thought about it, the more I realized just that Bodies Bodies Bodies couldn’t have ended any other way. David’s accident spiraling into friendship-ruining arguments and four other deaths is as nihilistic and darkly funny as the rest of the movie.

“For me, the key into the whole film was coming up with ‘There’s no killer,'” Bodies Bodies Bodies director Halina Reijn told Mashable in a phone interview. “That makes it into something interesting to me, because then it is all so real. There’s no ghosts. There’s no evil Gargamel character. It’s about actual group pressure, and it could happen to all of us.”

Reijn revealed that there were killers in early drafts of the film — the movie’s story is by Kristen Roupenian — with different killers for different drafts. The titular game and the psychological warfare of it were always constants, but the decision to eliminate the killer entirely didn’t come until later, when Reijn, the story team, and A24 decided to bring it in that direction. This took Bodies Bodies Bodies to a point that was more Anton Chekhov than it was a slasher, Reijn explained.

Reijn compares the ending of Bodies Bodies Bodies to Chekhov’s Three Sisters. In Chekhov’s play, the three sisters constantly obsess over returning to Moscow, but they never actually go. In Bodies Bodies Bodies, characters are always worrying about who the spree killer could be, but the final twist of the knife (or the champagne sword) is that there never was any killer, or really any danger, in the first place.

The sense of deflation that comes with finding out that there’s no slasher is key to Bodies Bodies Bodies, Reijn explained. “Even though [Bodies Bodies Bodies] is a very commercial fun ride, underneath it all I wanted it to be hedonistic and nihilistic, and just much ado about nothing. Because that is life!” 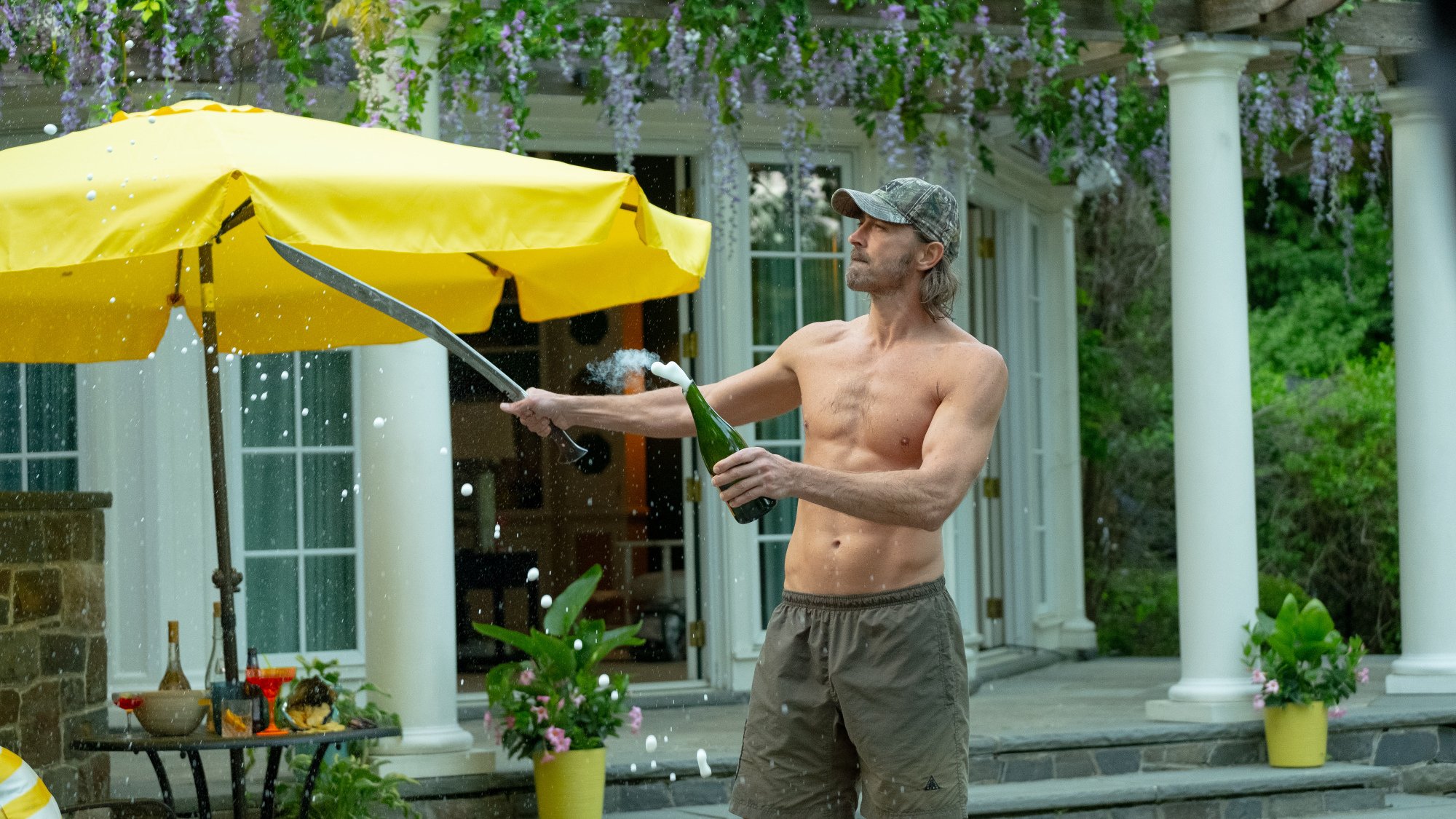 The way in which the “no killer” twist is revealed is equally crucial to the movie. Sophie and Bee (Maria Bakalova) discover David’s phone in the morning after the storm. Amid the fallen branches and spilled blood, they find a TikTok video that David filmed of himself trying — and seriously failing — to recreate Greg’s champagne move.

The fact that such a pivotal moment rests on a TikTok reveal emphasizes the large role internet culture and TikTok in particular play in Bodies Bodies Bodies. Right after this dark twist comes to light, the power in the house comes back on in a literal “aha moment” for Sophie and Bee. But in the face of this revelation, Bee’s main focus is on the fact that she finally has reception. She’s been through hell, witnessed several deaths, learned that her girlfriend may have cheated on her, and this is all she cares about? That’s a whole new level of phone addiction.

It’s a great punchline to a film that examines how we relate to technology and how integral it is to our lives, especially in times of crisis. David’s decision to try the champagne trick reflects on how we present ourselves digitally. His attempt to emulate Greg reeks of toxic masculinity and the need to prove that he can one-up someone he views as a threat. Posting that one-upmanship on TikTok so everyone can see it is an added bonus. He’d be able to hide his insecurities about Greg behind his own version of the tricks, and also enjoy the validation of TikTok views that he isn’t getting from his judgy friends. In the end, it’s David’s need for the escapism of the internet that kills him.

“I thought it was just telling to this time that we live in, where we’re constantly trying to filter our pictures to look like ideal images that we will never, ever be in real life,” said Reijn.

So there you have it: There was no killer, life is absurd, and if you’re planning on sabering open a champagne bottle, maybe you should reconsider. Bodies Bodies Bodies may as well come with a warning that says, “Do not try this at home… unless you’re Lee Pace…with your own personal Hobbit sword.”