‘Wonder Woman’ whips Tom Cruise at the U.S. box office, but ‘The Mummy’ rules the world 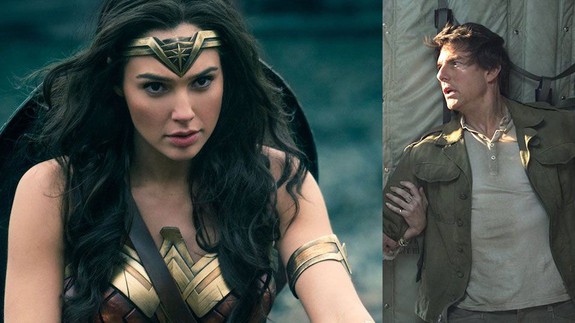 Sorry Tom Cruise, but Wonder Woman is just too powerful.

Patty Jenkins’ juggernaut had the best week-over-week hold for a modern superhero film at the domestic box office, dropping only 45% for $57.2 million in its second week and casting a dark shadow over Universal Studios’ attempt at launching its own “cinematic universe” with The Mummy.

But if we’ve learned anything from Tom Cruise over the years, it’s to never count him out.

SEE ALSO: ‘Baywatch’ bombed. What should Dwayne Johnson do next?

The Mummy did a sickly $32.2 million in North America for its opening weekend, according to estimates provided by ComScore, but its overseas haul of $141 million is one of Cruise’s best everCritics may have hated it and U.S. audiences aren’t fooled by whose name is on the marquee, but around the world, it’s been proven time and again that movie stars still sell tickets. Read more…