Why women in tech are so angry all the time 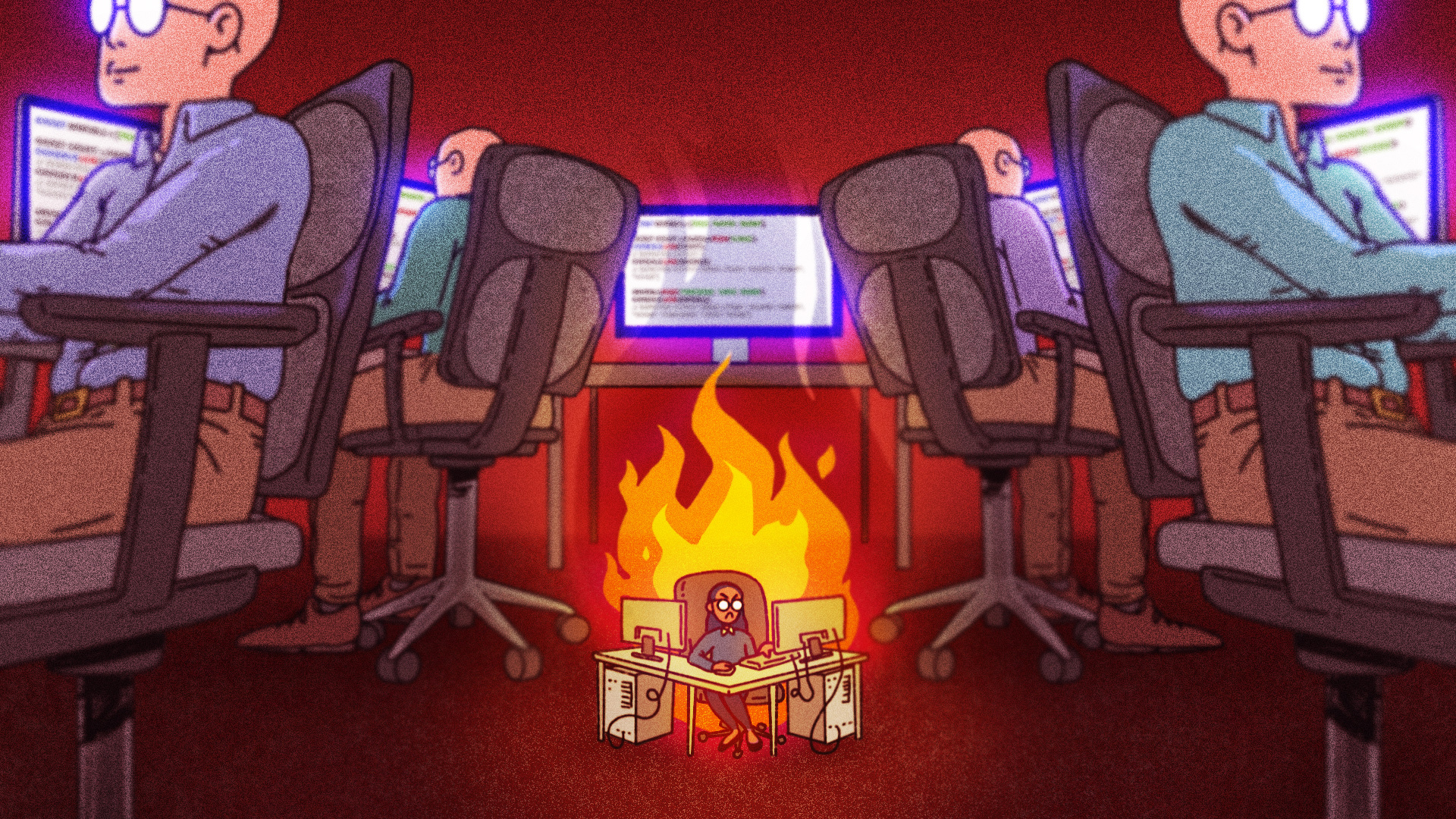 This piece is part of an ongoing series exploring what it means to be a woman on the internet.

A few months ago, I went to get my mail to discover an unexpected fat tattered envelope with a rubbed-out return address and international stamps. I immediately seized up. My first thought was someone had mailed me anthrax. Once my heart slowed down enough to read the blurred address, I recognized a friend’s name and opened a lovely Christmas card that had been lost in the mail.

Who fears poisoning by mail? Diplomats, high-ranking officials, political figures, or celebrities? It should not be me. I’m simply a woman who works in tech and posts about it online. In exchange, I receive hoards of angry comments ranging from annoying trolling to threatening death, assault, and violence, and even phone calls to my work to try to get me fired.

I shared online about this experience and immediately found another woman in tech with an eerily similar story. Our crimes? She shares free tips and resources about breaking into the tech industry. I make tech jokes and satire videos poking fun at Silicon Valley.

Not every woman in tech will experience such life-threatening fears; we are not one cohesive unit and have all faced different challenges. Some of us have been harassed or put in uncomfortable situations. Some of us have been underpaid, brought in at lower seniority levels, and not promoted. Most of us, however, experience constant microaggressions. Every woman working in tech I know has at least one story that makes your blood boil. But the more you hear these stories and realize that they are everywhere, you feel frozen and trapped. Of course women in general face microaggressions in the workforce, but it truly feels like the cancerous misogynistic tumors in our industry in particular run so deep that we may never be able to bisect them all.

There really is always something to be angry about.

Whenever I share stories in a public forum, I know I will get a response along the lines of, “you women are always angry about something.” Even though they intend to be condescending, they underscore the ironic validity of their own point. There really is always something to be angry about.

Another common response we know we will get is the comment that we cannot complain because we are well paid (as if any amount of salary could justify misogyny, harassment, etc…). And while we are well paid, we are still, on average, not as well paid as our male peers. Women of color even more so. Not to mention a huge gap in seeing representation in leadership and more senior roles with very slow change.

One step forward, two steps back

Any small gains in progress we make in representation can feel like one step forward two steps back. Women still can’t be too aggressive, too bossy, too friendly, or not friendly enough or they risk their career progression. Advocating for equal pay can get you labeled as “problematic,” despite popular advice that women just need to “lean in.” Speaking up against harassment can get you ostracized in the industry, or worse, taken to court by your employer over breaking strict NDAs. Too often, the abusers in these stories are quietly given large payoffs and the survivors are publicly mobbed and left with nothing. It would send a strong message if companies stood by the survivors instead of the abusers, but I won’t hold my breath.

Ellen Pao. Susan Fowler. Timnit Gebru. Emi Nietfeld. Ifeoma Ozoma and Aerica Shimizu Banks. So many more. From all over the tech industry in the last few years women have come forward to share their experiences with mix-and-match but universal themes of sexual harassment, inequality, and discrimination. How many more stories are out there unable to be told?

Despite many women braving the consequences and speaking up to share their experiences publicly (and risking exposing themself to more abuse as they do so), men still act surprised by each story. They rush to reply that they are “shocked,” “appalled,” “so sorry on behalf of the male species,” but they assume it couldn’t be happening where they are and in general seem to not take any action in their own teams and companies. Or maybe they just can’t comprehend the harm that is happening. When I shared the anonymous threats of assault, graphic violent imagery, and sexualizing posts about me during a particularly bad week, a male peer replied that he knew how I felt because someone called him “a moron” the other day in a political back and forth on Twitter. Respectfully, you have no idea how I feel on a daily basis.

I understand very personally how discussing women-in-tech issues can feel like a constant faucet of bad news that you just want to turn off sometimes. A recent lawsuit filed against Blizzard Entertainment painted a picture of an environment ripe with constant sexual harassment that had been tolerated for years. After Blizzard issued a statement in response denying the accusations, a move the CEO later called “tone deaf,” employees organized a walkout. While I read through the lengthy list of allegations in the complaint, I was disgusted but not surprised. A friend avoided reading the accounts altogether because she couldn’t emotionally handle it. When we read these stories over and over again, we can become desensitized and it starts to be normalized. We must actively fight against the feelings that any of this is normal or acceptable.

What can be done to help?

Many men do want to help fight these problems but just really aren’t sure how. While fixing the industry can feel like an insurmountable challenge, there are actionable things allies can do to help on a smaller scale.

The statistics say women leave the tech industry at a 45 percent higher rate than men. Given the anecdotes, it is surprising those numbers aren’t worse. While I’m excited the representation of women STEM undergraduates has been increasing, I still worry for the next generation of young women entering the industry. For now, all I can do is keep fighting the demons in this industry for them and stay public and loud to show a tiny slice of representation. Staying in this industry as a woman requires a large amount of grin and bear it, that fairly, not everyone wants to endure. Those women leaving the industry take with them years of experience and immeasurable talent. The industry will suffer this huge loss because we would rather not deal with toxicity.

Women in tech need to waste time, resources, and energy fighting a misogynistic war on multiple fronts but still show up to do the work and demonstrate excellence while under a microscope.

Emily Kager is a software engineer in San Francisco originally from the rolling farmland of Lancaster, Pennsylvania. She works as a mobile developer and in her free time she’s hiking, biking, running, skiing, climbing, or hanging out with her two dogs.