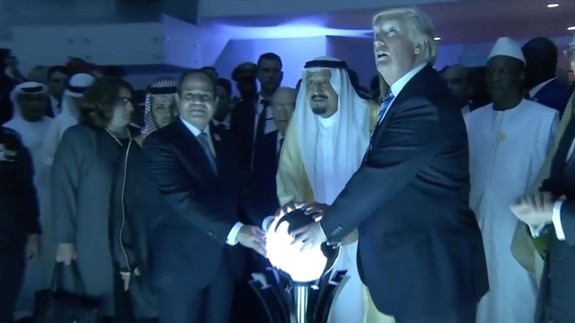 “By touching this glowing orb, you hereby swear your eternal allegiance to the international Legion of Doom, got it?”

That’s just one of the many theories that began swirling around social media on Sunday when Donald Trump appeared in photos clutching a mysterious, illuminated globe in a darkened room alongside Saudi Arabia’s King Salman and Egypt’s President Abdel Fatah al-Sissi.

Of course, the explanation behind the seemingly odd photo is far less nefarious: The orb is actually an installation at the Global Center for Combating Extremist Ideology in Riyadh, Saudi Arabia, according to The Washington Post.  Read more…