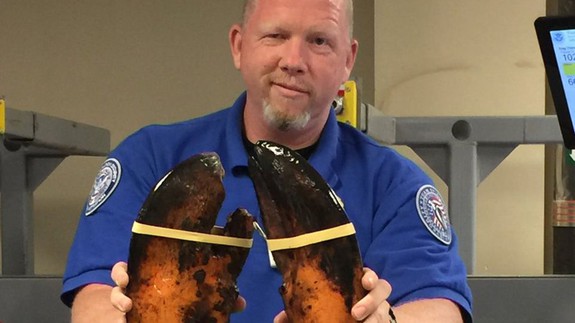 On this edition of “what the hell are you trying to get through airport security,” a TSA agent at Boston Logan airport came across a surprising passenger.

SEE ALSO: ‘Louie’ the 132-year-old lobster freed after spending 20 years in a restaurant

While screening checked luggage, the agent found a massive crustacean chilling in a cooler and snapped a picture with his clawed friend.

.@TSA officers are skilled at screening all sorts of items in checked baggage…including this 20+ pound lobster at @BostonLogan pic.twitter.com/euhyyO6F7V

The lobster was over 20 pounds. Look at the sea creature compared to the inspecting agent. It’s bigger than his torso! Read more…