The ‘Stranger Things’ kids rocked ‘Lip Sync Battle’ so hard, everyone else should probably give up 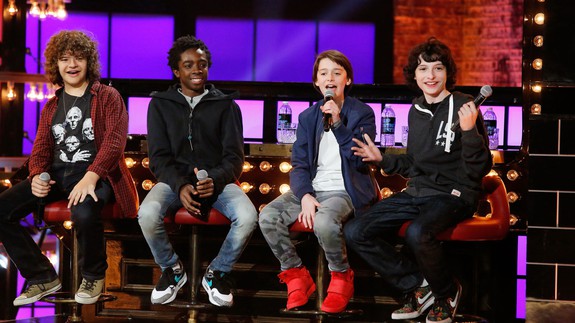 Forget Dungeons and Dragons, there’s a new game in town for the stars of Stranger Things — Finn Wolfhard, Gaten Matarazzo, Caleb McLaughlin and Noah Schnapp — who wowed the crowd with a four-way showdown on Spike’s Lip Sync Battle this week, basically rendering all other Lip Sync Battle performances obsolete. (Except Tom Holland’s; he can stay.)

Sadly, Millie Bobby Brown was absent from the contest, but we already know all about her musical chops and lip sync prowess, so maybe the boys were just afraid she would beat them too easily.

Mashable was on hand for the episode’s taping, which took place at a Studio City backlot on a sunny afternoon in late March, where the live audience was an eclectic mix of nostalgic Gen Xers and exuberant millennials — all of whom seemed just as pumped about seeing the Stranger kids in the flesh as the actors were about watching each other’s performances. (And witnessing Chrissy Teigen dressing up as Barb and Eleven, natch.) Read more…