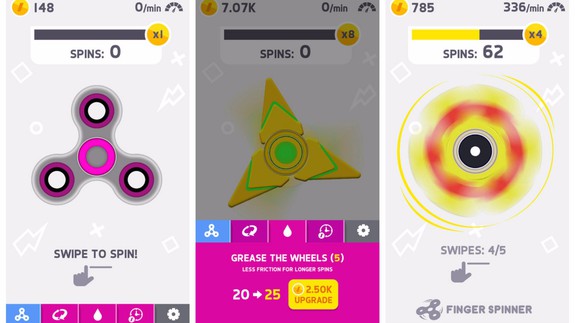 In a matter of weeks, fidget spinners went from something almost nobody had ever heard of to the must-have toy of the season. The anxiety-reducing handheld spinners are so ubiquitous that dozens of developers are trying to cash in on the phenomenon with fidget-spinner themed mobile apps.

People are into it, apparently. So into it that the top game in the iOS app store is a virtual fidget spinner that doesn’t do anything but spin.

The app is called Finger Spinner and it lets you swipe a virtual fidget spinner. You get five swipes to get it to spin as many times as possible, and you earn coins based on how many spins you get. The coins are used to improve the stats of your spinner, and spinning unlocks new spinners that all act the same but are aesthetically different. Read more…