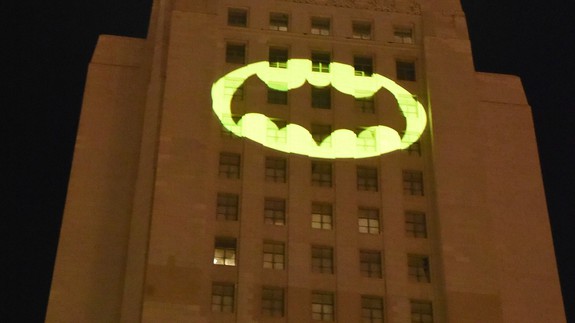 Just how else do you commemorate the Batman, Adam West.

Hundreds of people gathered in downtown Los Angeles to pay tribute to the late actor’s life on Thursday night, with the main act being the Bat-Signal shining on City Hall.

SEE ALSO: ‘You will always be Batman’: Celebrities post tributes to Adam West

The Bat-Signal is used in the series by police to help summon Batman. Perhaps for that reason, the commemorative light was switched on at 9 p.m. local time by Los Angeles Police Chief Charlie Beck and the city’s mayor Eric Garcetti, who addressed the crowd.

“Like you, we all spent many hours in front of the TV, same bat time, same bat channel,” Garcetti told the crowd, according to the Associated Press.  Read more…