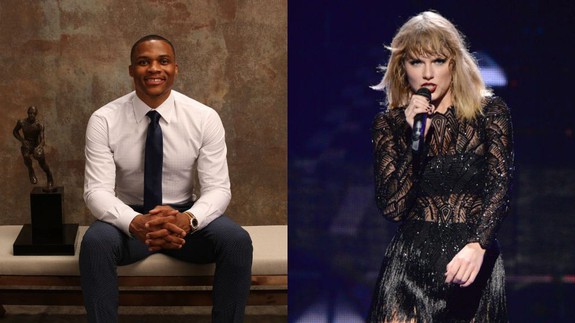 Hey, so guess who crept out of the woodwork: Taylor Swift!

The popstar recorded a video to help congratulate the Oklahoma City Thunder’s Russell Westbrook being crowned the NBA’s most valuable player for 2017.

In the one-minute clip released on Monday night, Swift jokingly tells Westbrook she taught him basketball, but that he helped with the idea for “Shake It Off.”

The video is a little awkward — okay, very awkward — but cute.

“I remember the first time you beat me at basketball, and I was very upset, and you said — if you remember correctly — you said, ‘you just have to shake off.’ And I got an idea,” Swift said.  Read more…