The drys are getting drier.

NASA satellite photos underscore how snow trends are significantly changing in the Sierra Nevada — the mighty mountain range California heavily relies on for water, which irrigates the Golden State’s prosperous growth of fruits and vegetables.

Snow and rainfall naturally vary in California, referred to as “boom and bust” cycles. But dry spells have become more frequent and intense. “Over the past 10 years, there have been fewer boom years, while the dry years have been getting drier,” snow scientist McKenzie Skiles told NASA.

As the climate continues warming, snowpack has diminished, which is particularly problematic during drier years. Scientists found that between 2008 and 2017 the snow level in the Sierra Nevada (the elevation where it snows more than it rains) moved up 2,300 feet. “The result is less snow cover over time and less water stored in the snowpack,” NASA explained.

The satellite imagery below, showing both a 2006-2021 timelapse and a drought year in 2015 versus a wetter year in 2017, illustrate the extremes in California snowpack, and how increasing dryness threatens outdated, 20th century conceptions of water reliability. We’re living in a warmer, and warming, climate regime. 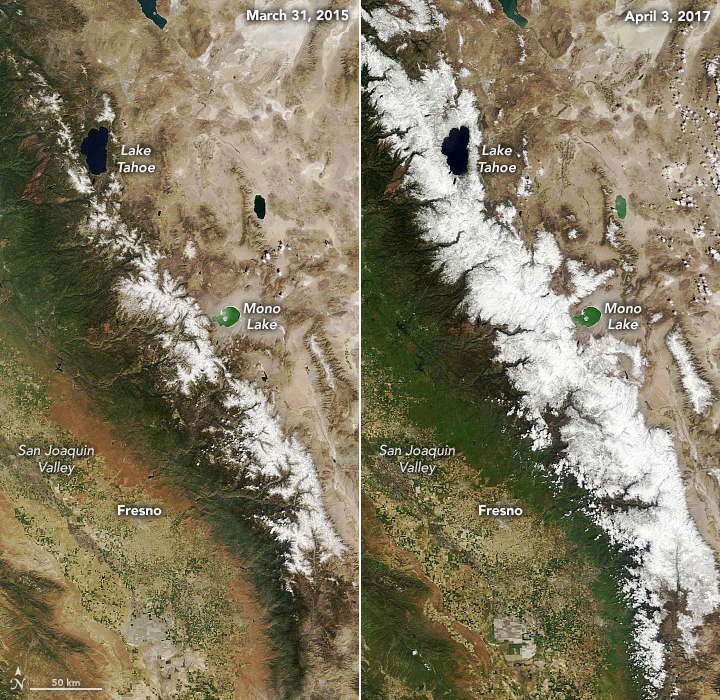 In the greater West, 2021 may end up as the driest year in modern history. What’s more, the Southwest is currently mired in an over two-decades-long megadrought, the most severe such drought in at least 400 years.

Yes, droughts come and go, but the dryness is becoming drier. “[Droughts are] going to get worse and worse unless we stop global warming,” University of Michigan climate scientist Jonathan Overpeck told Mashable in April.

The evidence is visible in the Sierra Nevada. And in the state’s dropping reservoir levels.