Jumping from drones is your newest extreme sport 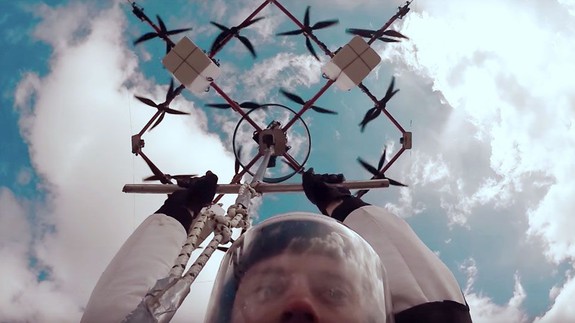 Whattup, James Bond? Here’s a new, incredibly dangerous but totally on trend stunt idea for your next film: drone jumping.

A drone company in Latvia has executed what it calls the “the world’s first drone jump.” Aerones’s 28-propeller drone hoisted a man over a 1,000 feet in the air after which he let go of the drone and coasted a bit before deploying a parachute to set him down safely back on earth.

Sure, this isn’t exactly edge of your seat stunt work, especially since another guy used a balloon to do the same thing from 18 miles above the planet. But still, it’s easy to see how this kind of drone-assisted sky diving could be used for stealthy military and spy missions in the future. Or maybe (more likely) it’ll become the latest extreme sports craze that’s only slightly more dangerous than parkour and subway car surfing.  Read more…

More about Drones, Stunts, and Tech