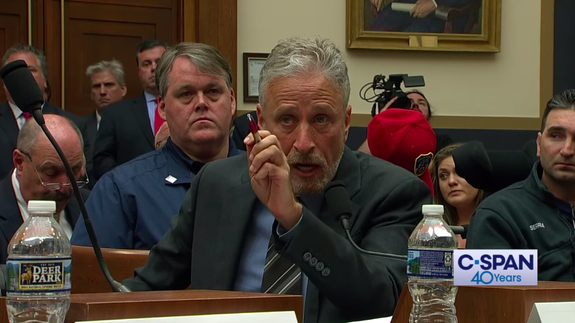 Jon Stewart, comedian and former host of The Daily Show, delivered an emotional speech Tuesday that advocated for full funding of the 9/11 first responders compensation fund, and absolutely shredded Congress for its inaction.

Stewart, who has long championed the cause, began his statement by angrily pointing out how few members of the House Judiciary subcommittee were present: “Sick and dying, they [first responders] brought themselves down here to speak to no one. It’s shameful. It’s an embarrassment to this country and it is a stain on this institution.”

Seething, Stewart lambasted an empty set of chairs. “It would be one thing if their callous indifference and rank hypocrisy were benign but it’s not. Your indifference cost these men and women their most valuable commodity: time. It’s the one thing they’re running out of.” Read more…