Fan stops traffic to get a selfie with The Rock 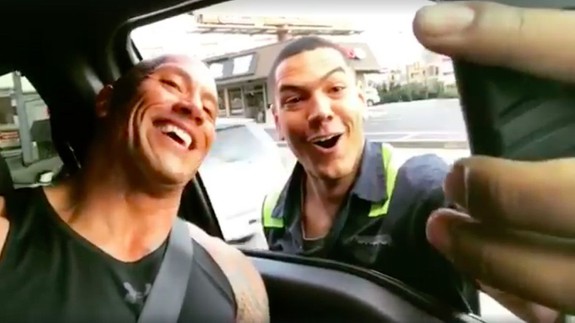 Dwayne ‘The Rock’ Johnson is all about making his fans happy and sometimes that means halting traffic to do so.

SEE ALSO: The Rock flawlessly recreated his most iconic ’90s outfit for ‘SNL’

The Rock was driving in his pickup after work when a fan pulled up beside him, recognized the actor, and started to freak out.

In a Facebook post, he wrote, “I rolled the passenger window down to say hello and then he REALLY freaked out.”

The fan immediately parked his rig in the middle of the road and went to stand next to The Rock’s driver side window, which was in the way of oncoming traffic. The actor pulled out his phone to record the hilarious encounter. Read more…