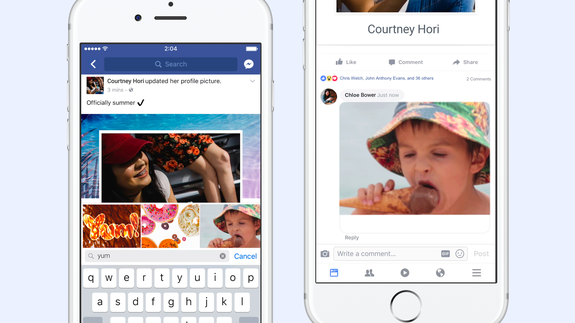 That sweet reaction GIF finally has a place on Facebook.

After a months-long test of the feature, the social network announced that it’s finally rolling out support for GIFs in Facebook comments.

Beginning today, anyone can add a GIF to a Facebook comment using a new GIF button that appears alongside the emoji picker. Much like the GIF button in Facebook Messenger, the new GIF comments are sourced from Facebook’s GIF partners, including Giphy, Tenor, and Disney.

Importantly, there are a few limitations. Though you can search for GIFs using the feature’s built-in search, adding a specific GIF you have in mind may be a bit more difficult. You can’t upload your own GIFs or post GIFs via a URL like you can with a normal Facebook post. Read more…

More about Tech, Facebook, Gifs, Apps And Software, and Tech