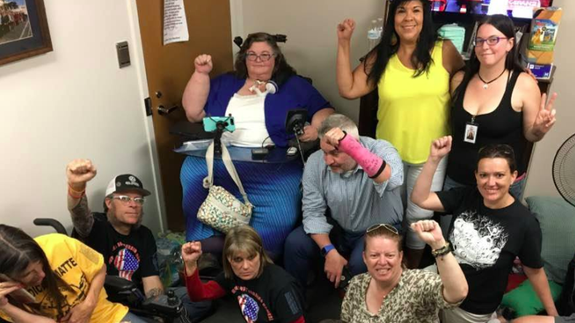 Dawn Russell spent two nights camped out with nine other people in a small room in Sen. Cory Gardner’s office. On Thursday evening, after their 60-hour sit-in, Russell and her fellow activists were removed from the office and arrested.

Russell was there because the Colorado Republican is one of the key swing votes who could either help pass or stop the GOP’s health care bill — and she is one very angry constituent.

The Denver-based activist lives with cerebral palsy, a neurological condition that affects body movement and muscle coordination. She’s a veteran member of ADAPT, a grassroots community that organizes disability rights protests. They frequently stage protests against laws that would reduce funding for Medicaid, the federal health program that aids low-income people and those with disabilities. Read more…