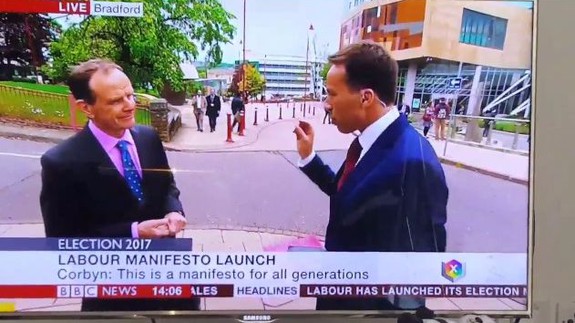 First it was a North Korea expert — now it’s a TV presenter to left red-faced while on air on the BBC.

Ben Brown was interviewing the BBC’s assistant political editor Norman Smith in Bradford when a passerby wearing sunglasses came into the shot behind them.

She gave thumbs up and could be heard saying: “Absolutely fantastic.”

But the presenter pushed the woman away while grabbing her chest and continued the interview.

The woman, visibly surprised, then slapped his arm and walked away.

In a tweet later, Brown said the incident was “completely unintentional”.

More about Woman, Blooper, Breast, Bbc Reporter, and On Air