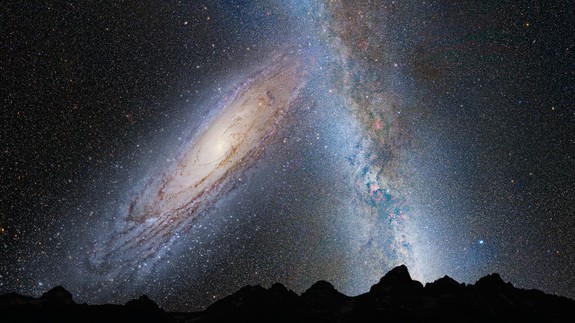 Astronomers have long suspected that the colossal Andromeda galaxy would, in billions years, collide with our humble Milky Way.

The collision was forecast to happen in some 3.9 billion years. But after astronomers analyzed new data captured by the European Space Agency’s star-surveying satellite Gaia, they now put the imminent date at 4.5 billion years — so 600 million years later than initially expected.

The event, detailed in The Astrophysical Journal, is characterized as a “swipe” rather than a direct collision. The end result would be a merger of the galaxies into one, monstrous galaxy.

“This finding is crucial to our understanding of how galaxies evolve and interact,”  Timo Prusti, ESA Gaia Project Scientist who had no role in the study, said in a statement.  Read more…