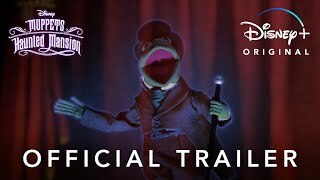 The Muppets are descending on Disney in a creepy-yet-cutesy debut trailer for Muppets Haunted Mansion — the first-ever Halloween special from everyone’s favorite felted fiends that’s actually set inside the iconic Disney Parks attraction.

This killer crossover follows famous daredevil the Great Gonzo as he attempts to survive an entire Halloween night in “the most grim grinning place on Earth.” In the sneak peek, which is accompanied by narration that sounds just like what you hear on the ride, we see Miss Piggy reimagined as Madame Leota, Beaker and Dr. Bunsen Honeydew as possessed busts, and even Janice as the tightrope walker from one of the portraits in the stretching room.

Will Arnett, Yvette Nicole Brown, Darren Criss, Taraji P. Henson, Chrissy Metz, Danny Trejo, and more play alongside the Muppets as Haunted Mansion characters, and John Stamos makes an appearance as himself. Plus, we’re getting three new original Muppets songs and a Muppets cover of King Harvest’s 1972 hit single “Dancing in the Moonlight.”