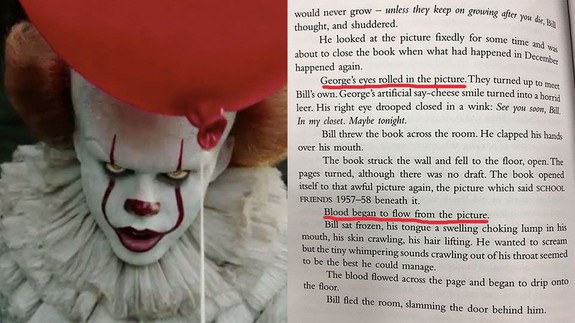 Warning: Contains spoilers for Stephen King’s novel It (and possibly spoilers for the upcoming film adaptation, too).

For rampant Stephen King fans like myself, 2017 is set to be a year of glorious, clown-filled happiness.

We now have two trailers for Andrés Muschietti’s upcoming adaption of It, and so far things are looking promising. We’ve seen the iconic opening sequence with Georgie chasing his paper boat through the streets of Derry, and the beginning of a nicely creepy journey into a murky storm drain. We’ve even had our first proper glimpse of Pennywise.

SEE ALSO: This new ‘It’ trailer is even creepier than the first one Read more…

More about Film, Scary, Stephen King, It, and Novel